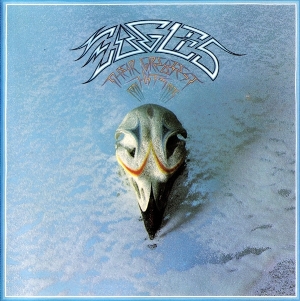 I’ve never been too much of a fan of pre-Joe Walsh Eagles. It’s all a bit too country, too many jangling guitars. I prefer the edgier twin-guitar RAWK of Don Felder and Joe Walsh, rather than this singer-songwriter stuff.

I’ll still love Hotel California to the day I die, but there’s a reason this greatest hits set has sold so many copies. For a very long time, it was the best-selling album of the twentieth century in the USA, until it was finally surpassed by Michael Jackson’s Thriller following his death in 2009.

Seeing the Eagles live recently – or what is left of the band, having lost Glenn Frey a couple of years ago – I was reminded just how good this earlier material is. When you’re listening to six guys blast out a wall of harmonies, it sounds unbelievable.

Frey’s death at the age of 67 left a gaping hole in the band. Don Henley’s voice is too smooth, too AOR in comparison, and Walsh’s voice is too weird, too out there. Would they get somebody else in to stand in for Frey?

The answer is yes…and no. Established singer-songwriter Vince Gill was brought into the band to fill the gap left by Frey’s absence. His guitar playing and singing – particularly a standout performance on Take It To The Limit – more than earned his place alongside Felder and Walsh.

The band’s secret weapon though was a clone of Glenn Frey, in the form of his 25-year old son, Deacon Frey. Young and handsome (next to the old men he shared a stage with), his vocals and acoustic guitar on the songs his father used to tackle – Take It Easy, Peaceful Easy Feeling, Already Gone – was uncanny. The apple doesn’t fall far from the tree. And good on him – apparently his first show with the band was at Dodger Stadium, so very much launched into life in the fast lane. 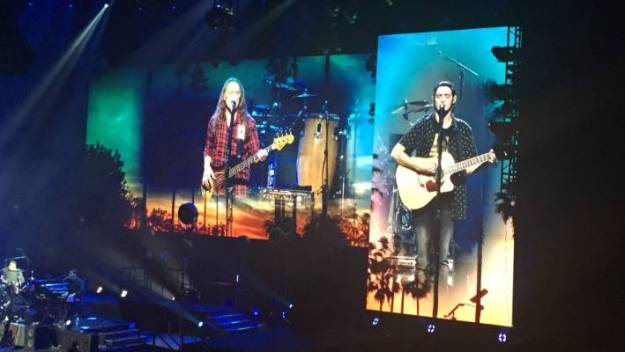 The big question though was how the guitar solos on Hotel California were going to be handled. Lead-guitarist Steuart Smith was clearly the replacement for Don Felder, but I was curious whether he would play the song on a double-necked guitar as per his predecessor. Worry not, a blast of Mexican trumpet led into the opening 12-string acoustic section of the song, with a solitary spotlight on Smith playing a double-neck. My favourite guitar solo/s didn’t disappoint. 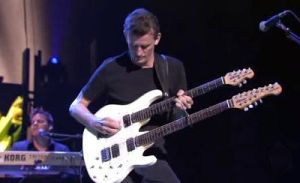 I expected the Eagles greatest hits – and got it! – but what I didn’t expect was the various solo songs by Joe Walsh and Don Henley. This was just as good – Walsh’s In The City, Walk Away, Life’s Been Good, Funk #49 and Rocky Mountain Way, and weirdly as a closer to the night (much to the chagrin of the man sat next to me), Don Henley’s The Boys Of Summer.

I wasn’t sure about seeing the band with so few original members, and not only were the wife and I both sick with head-colds, but we were also sat about 50 seats in from the aisles, which made getting out for refreshments virtually impossible. Despite all of this, it was still fantastic.