I’ve just re-watched Home Alone. It’s probably the twentieth time I’ve seen it, but it felt like the right time to finally show it to my three daughters, aged seven, five and three. The three-year old was a little scared, but the other two enjoyed it as much as I hoped they would.

It’s funny how much of an evergreen hit the film has become. Upon its release it was a throwaway comedy, albeit a very successful one, but in the last decade or so it seems to have become as synonymous with festive TV scheduling as The Great Escape was in my youth.

What’s not to like? The McAllister family are as ignorant and self-absorbed as you’d want late ‘80s yuppy suburbanites to be portrayed, Macauley Culkin’s acting is just on the right side of precociousness, and Joe Pesci and Daniel Stern’s wet bandit burglars are laughably moronic. But it’s the two white knights of the film that give it its heart: John Candy’s polka-playing airport saviour to Catherine O’Hara, and Roberts Blossom as the ominous neighbour Old Man Marley.

The film’s other secret weapon is its soundtrack and score by John Williams. Rehashing the childhood wonder / childhood danger motif that Williams has used many times, first with Close Encounters Of The Third Kind and E.T. The Extra-Terrestrial, but later with Jurassic Park and his Harry Potter scores, Home Alone stands alongside his seminal work from the ‘70s and ‘80s.

This expanded soundtrack release, from Mondo Records, includes the festive pop songs from the film. These are another highlight of the film, as they’re not the obvious, popular versions of the Christmas classics (and presumably selected for cost reasons): the Drifters’ version of White Christmas, Mel Tormé’s Have Yourself A Merry Christmas, and Please Come Home For Christmas by Southside Johnny Lyon.

This reminds me of an old girlfriend. She had four albums at her house on Leeds Road in Huddersfield: Ladies And Gentlemen – The Best Of George Michael, a cassette of Blur’s The Great Escape, Tracy Chapman’s debut, and finally this, the second Penguin Cafe Orchestra album.

I notice that I now own three of those albums. I can’t ever see myself owning the George Michael compilation, but you never know. It hasn’t ever been released on vinyl, yet. Maybe one day.

I remember once lying in her bed one day, mid-morning, listening to music. The doorbell went downstairs, and she got out of bed and stood at the top of the stairs. “Oh, it’s just Dad,” she said as she started to walk down the stairs.

I panicked. Here I am, in my birthday suit, lying in her bed; his daughter’s bed. I hadn’t met him before – we’d only been seeing each other for a couple of weeks at that stage – and I didn’t particularly want to meet him under these circumstances.

What do I do? Doesn’t this happen all the time on television and in films? Do I hide under the bed? Hide in the wardrobe? Jump out the window? No, that would be worse. A naked man with broken legs lying on the pavement is harder to explain.

I sat up in bed, frozen in fear. A rabbit caught in headlights. Do I stay where I am, and resign myself to shaking his hand while I have the security of a duvet to cover myself? Or do I risk getting out of bed and putting my clothes on before he has a chance to climb the stairs and open the door?

In the end, I stayed frozen solid – possibly with a sub-conscious hope that he had the eyesight of a Tyrannosaurus Rex, and wouldn’t be able to spot me if I stayed absolutely still.

Fee-fi-fo-fum, I smell the blood of an Englishman. Be he alive, or be he dead, I’ll grind his bones to make my bread.

She came back upstairs a few minutes – although it felt like a few hours – later, without her father. He had come around to drop off an LPG gas bottle, and she had somehow managed to persuade him not to come in.

A wave of relief washed over me. She pressed play on the Penguin Cafe Orchestra CD and got back into bed. 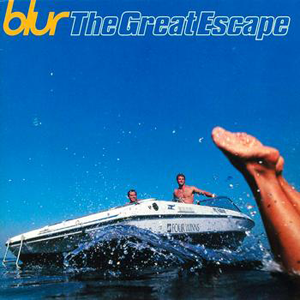 This reminds me of a former girlfriend who used to live in a vast three- or four-storey Victorian house in Huddersfield. If we ever ate or cooked in the basement kitchen, we would listen to this album – the only album she had in that room, on cassette. It was probably my first experience with the album, given that the hype surrounding its release and the press-fuelled war with Oasis had completely passed me by.

The reason I prefer Parklife to this is probably the themes involved – I can relate to the Kinks-like Englishness of Parklife, but I have trouble relating to the desolation and loneliness that permeates through The Great Escape.

I also have a big problem with the reverse of the sleeve, where the four band members are dressed as estate agents or stockbrokers. It has to be one of the lamest band photographs I’ve ever seen (except maybe this one). Albarn actually looks like a woman! The only thing he’s missing is a pair of pearl earrings. This might have been funny at the time, but looking back having this photo on the back of one of your most popular albums can be dangerous. It might not turn Blur fans off the band but it definitely wouldn’t make non-Blur fans want to listen the band.

Love the front cover though.