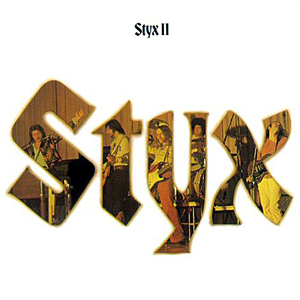 One weekend in May of last year I had great fun walking around Sydney, Australia with Styx’s Too Much Time On My Hands blaring out of my iPod. I had been introduced to the band through an awesome parody by Paul Rudd and Jimmy Fallon, which led me to seek out the Paradise Theatre album. I checked out a greatest hits compilation around the same time, and wasn’t overly fond of what I heard. Styx, like a lot of long-surviving American rock bands, had clearly seen the commercial appeal of releasing a multitude of power-ballads as singles.

So when I saw this record in the sale racks of my local record store – alongside the more celebrated Pieces Of Eight, which I picked up at the same time – I thought I’d give it a chance. The band sound young and hungry, but even on the prog-oriented moments of the album they threaten to break into a power-ballad at any moment.

Lady, a power ballad in everything including name, was a belated success for the band. The band recorded two more albums – 1973’s The Serpent Is Rising and 1974’s Man Of Miracles – before Lady hit #6 in the US charts in 1975 and sent its parent album gold. The band moved from Wooden Nickel Records to A&M as a result, and never looked back. 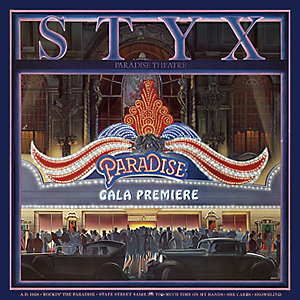 A year ago, I knew nothing by Styx. But now, thanks to a spot-on homage by Jimmy Fallon and Paul Rudd, the fantastic Too Much Time On My Hands has become my song of the year.

The timing of that when I saw that video on The Tonight Show also helped. I caught it just before I spent a long weekend in Sydney, and it’s always good to have a new song to soundtrack a trip away. It might not be a new song, per se, but it was new to me.

Styx don’t sound a million miles away from Aerosmith, so I’m not sure why it’s taken me so long to get around to listening to them. Tommy Shaw, the guitarist / vocalist from Styx, was even a song doctor for Aerosmith during the Geffen years (he co-wrote Shut Up And Dance from 1993’s Get A Grip), but even that fact didn’t turn me onto them. There are a number of dusty rock bands from the ‘70s and ‘80s that didn’t travel well, both figuratively and literally, to English audiences and I would regard Styx as one of these for sure.

Paradise Theatre is album number ten for the band, their only #1 album in the U.S., so I have a lot of catching up to do.

Hit: Too Much Time On My Hands