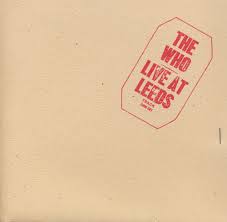 The quintessential single-disc live album, Live At Leeds needs no introduction. I first heard about it through a comedy show – Vic Reeves and Bob Mortimer’s first series on the BBC (The Smell Of Reeves & Mortimer) – where it was featured in a novelty song: The Who, Live At Leeds / A Packet Of Seeds / And a top hat full of gloy, gloy, gloy. Once you start buying rock music though, you quickly learn about the high watermark this record is held up as.

There’s just something infinitely more attractive about a live set on just one record. Short, sharp and to the point. AC/DC’s If You Want Blood – You’ve Got It is another great example of capturing something so energetic in such a small timeframe. The antithesis would probably be something like Peter Frampton’s Frampton Comes Alive album, about as far away from the immediacy of the Who as you could imagine.

There are just six songs on this record, mainly taken up by the fifteen minute extended medley of My Generation and the eight minutes of Magic Bus. Looking at the full set list from the Leeds gig, it’s a wonder how they managed to reduce it down to just two sides of music – a staggering thirty three songs played on the night would have provided enough material for three or four discs.

The one person who should be stood up against a wall and shot for this travesty of an album is George Martin. In just eighty three minutes, Martin manages to avoid all traces of innovation he was known for in the previous decade, and produces an album full of schlocky middle-of-the-road Beatles covers. With very few exceptions, each song sounds like it was recorded with Murph and the Magictones (in the Armada Room at the Holiday Inn, “Quando Quando Quando…”).

I’ve never seen the film that this album soundtracks, and I don’t think I ever want to. I’ve seen the segment where Aerosmith perform Come Together on YouTube – the highlight of the album (and while you might think I would say that, being a diehard and unapologetic Aerosmith fan, Robert Christgau earmarked it at the time as being the best of a very bad bunch, along with Earth, Wind & Fire’s Got To Get You Into My Life); but the farcical stuff that was going on around Aerosmith, involving Frankie Howerd, was very hard to watch.

Who would ever want to listen to Donald Pleasance sing (or rather, say) I Want You (She’s So Heavy)? While Peter Sellers doing A Hard Day’s Night in the ‘60s raised a smile, this just sounds bad. And Frankie Howerd singing When I’m Sixty-Four and Mean Mr. Mustard? Are you fucking joking?

Just to make things ever worse, the album is one of those annoying ‘70s double albums where sides A and D are on one disc, and B and C share the other disc. I’m prepared to forgive certain double albums for this (Electric Ladyland, Songs In The Key Of Life, for example), but with this album being so unlistenable I really resent the inconvenience. Did anybody ever even see one of those turntables that would play this sequence of sides? I’m sure it was just a record company conspiracy to confuse stoned people in the 1970s: “Hey man, as well as being blind, Stevie Wonder doesn’t seem to be able to spell. What gives, dude?”

Hidden Gem: Get Back – Billy Preston

Like a lot of bands or artists that are more famous for their live work than their studio work, Peter Frampton’s albums prior to Frampton Comes Alive sound quite weak.

He was obviously doing something right, as the songs sound great when they appeared on that live offering. In their original environment though, they just don’t sound fully formed. I wouldn’t put it down to the production – there’s nothing that sounds out of place – but there’s just an absence of the energy that spills out of Frampton and his band on the live album. The songs, in the context of Frampton Comes Alive all seem to fit together and complement each other that little bit better.

A song like Doobie Wah (a shameless Doobie Brothers rip-off if I’ve ever heard one, saved only by the blatant confession in the title) on this album sounds like a completely different song that pops up as the second track on Frampton Comes Alive. It is the same song, but the energy is just missing here. Peter Frampton was just in the right place at the right time with his blockbuster live album, and I guess that live set is now best remembered as a symbol of the type of rock excess that punk came along and happily challenged.

Hidden Gem: I Wanna Go To The Sun