You’d be forgiven for thinking that by the time of George’s eighth solo album, he was bereft of ideas. This 1979 effort finds him not only running out of ideas for album titles, but he also re-uses earlier material: the second-track, Not Guilty, is a leftover from the last self-titled album he was involved in, the Beatles’ eponymous 1968 release.

But there’s lots to like about this record. It’s a bit happier and a bit more laid-back than his previous work, having married Olivia Arias and become a father to Dhani a year earlier.

Side-two opener Faster – “inspired by Jackie Stewart and Niki Lauda” – is perhaps one of the last hidden gems of George’s solo career – a non-charting single, released as a picture-disc (a first for a Beatle past or present) with all proceeds going to charity (a cancer fund set up following the death of Swedish F1 driver Gunnar Nilsson in 1978). George must have had enough invested into the song to go to the trouble of filming a promotional video for it.

Speaking of chart positions, this album comes a full five years after George had a #1 single anywhere in the world – 1973’s Give Me Love (Give Me Peace On Earth), the sole single from Living In The Material World, which topped the US Billboard. His poor chart performance through 1977 and 1978 correlates with the rise of punk, and his more mature songwriting was probably at odds with Johnny Rotten, Joe Strummer and the rest of the new breed of youth music.

Here Comes The Moon is lovely, the first single Blow Away is great, and there really isn’t a weak song on the album. But that’s probably the rub – while George might not write or record bad songs by this point, he also doesn’t write or record anything particularly outstanding. His next single, All Those Years Ago in 1981 performed much stronger in the wake of John Lennon’s death, and it wouldn’t be until 1987 before he topped the charts again (with his Jeff Lynne-produced cover of I’ve Got My Mind Set On You).

Mention must be made of George’s hairstyle during 1979. The rear cover image shows him walking across his garden, not only in the largest pair of flares this side of the 1960s, but with a perm long enough to make any poodle-breeder proud. 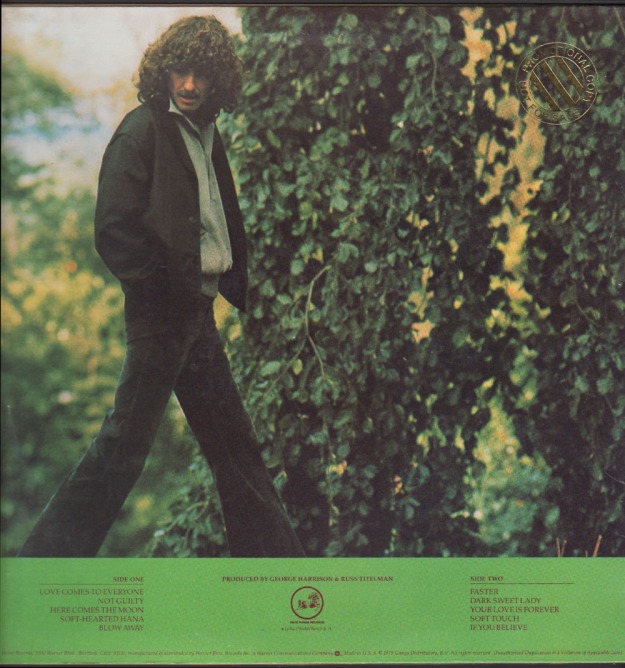