One of my favourite singles of the ‘90s was Shine by Collective Soul; a single edit and an album version, together with b-sides Love Lifted Me and Burning Bridges. There was something about those three songs that really worked together, as a sort of mini-EP of material. It came out in 1994, very much my Year Zero in music.

Twenty-five years later and I’ve finally got my hands on the debut studio album Shine was taken from, released for the first time on vinyl for Record Store Day’s Black Friday even in 2018. I’m happy to report that the two other songs from the single are present and correct also.

The album was recorded in a basement across 1992 and 1993 but was not intended for public release. Songwriter and frontman Ed Roland, sounding like a portmanteau of the Chemical Brothers’ Ed Simons and Tom Rowlands, put the songs together as a demo to sell to a publishing company. Shine quickly became a favourite on college radio, and the band were subsequently picked up by Atlantic Records who put the album out to maintain momentum until they could record a follow-up. 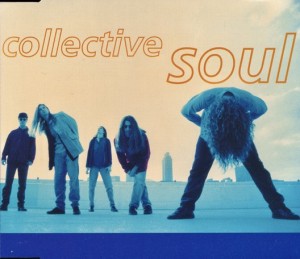 Roland, unhappy with the quality of the recording, asked to re-record the material as it wasn’t a true band recording, but Atlantic were adamant. As a result, the band would regard their self-titled 1995 follow-up as their true debut.

For me, the simplistic nature of Hints Allegations & Things Left Unsaid is part of its charm. It sounds like grunge meets AOR. You can hear how it’s been put together, overdub by overdub, in much the same way that Dave Grohl assembled the following year’s Foo Fighters debut. I’m sorry to say that Collective Soul disappeared from my radar after the Shine single, but I’m looking forward to catching up with the rest of their catalogue if this is the start of a reissue campaign.