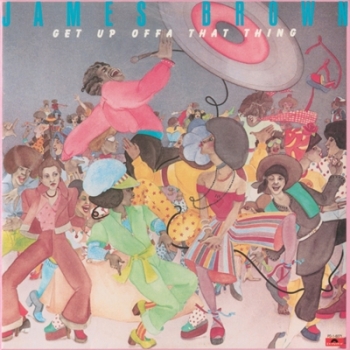 The collector in me breathes a heavy, internal sigh when I think about James Brown records. I’ve always liked the collecting aspect of music, almost as much as the tunes themselves. It started with Aerosmith, and I ingested everything greedily. Then I turned to AC/DC, same deal; then the Beatles. And on and on and on.

It’s too hard with James Brown though – he just has too many records. Wikipedia credits him with having sixty-three studio albums, fifteen live albums and forty-nine compilations (at the time of writing). Of course, there’s a lot of variability in there – a couple of diamonds for every half a dozen lumps of coal.

It’s always worth the effort mining his work though – this, his forty-sixth studio record, features one of his biggest hits, Get Up Offa That Thing / Release The Pressure. The song, released as a two-part single a couple of months before the album dropped, is a dancefloor smash and a worthy addition to the man credited on the sleeve as the Minister of New New Super Heavy Funk. He should add ‘doctor’ to his list of titles, given his medical advice in the song – ‘Get up offa that thing and dance till you feel better!’

I’d like to collect all sixty-three studio records but I think it might be too difficult, particularly considering my location in the world. I’m sure that I’d have a better chance if I was within driving distance of record shops in the Bronx, or other inner-city American areas. There’s always Discogs though, and that helped me greatly when I was collecting all of the James Bond soundtracks.

Perhaps I have another James-related quest in me. Five down, fifty-eight to go…

Hit: Get Up Offa That Thing / Release The Pressure

Hidden Gem: I Refuse To Lose