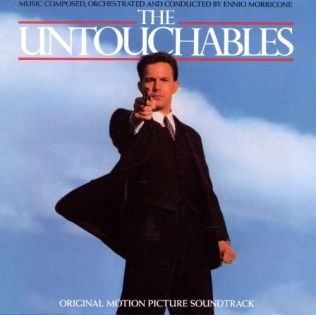 There are no half-measures in Brian De Palma’s The Untouchables. It is a film of absolutes.

We open on a 1930 Chicago street, where a young girl falls victim to the bombing of a city bar. She’s in the wrong place at the wrong time, but her innocence is purely there to shock us. It is not enough for De Palma to simply suggest that she perishes in the explosion. Instead, the girl is shown holding the bomb the instant before it explodes. De Palma doesn’t give us the opportunity to look away.

What are you prepared to do? You wanna know how to get Capone? They pull a knife, you pull a gun. He sends one of yours to the hospital, you send one of his to the morgue.

Here, Kevin Costner’s Eliot Ness is presented with absolutes. There is an established order in the city and corruption is rife in the police department. To defeat Capone, he must become the aggressor. To be the victor, protagonist must become antagonist.

After Ness’ first small victory against Capone’s crime empire, there are swift repercussions. At a business dinner with his henchmen, Capone punishes the one he sees as responsible by killing him with a baseball bat. Another absolute, this time to set an example.

This isn’t a film where the heroes don’t suffer consequences of their actions. Four soon becomes three and is then reduced to two.  In perhaps the film’s most emotional scene – of which there are many – Connery’s character, with his dying breath, again asks of Ness ‘What are you prepared to do?’

Even the name of their team – the Untouchables – suggests something absolute. In response, “Touchable” reads Capone’s message daubed in blood at the murder of the team’s accountant.

The Untouchables is also a film of set-pieces: the failed warehouse bust in the dead of night, the successful whiskey bust on the Canadian border, the train station shoot-out, the final showdown with Capone’s assassin on the courthouse roof. The train station sequence is probably the most famous scene in the film – a heavy-handed homage to Sergei Eisenstein’s Battleship Potemkin – featuring a gun battle between Ness, Andy Garcia’s Stone and a number of Capone’s henchmen attempting to protect his bookkeeper. The toppling baby carriage caught in the middle of the action provides the central focus of the exchange; we care as much for the safety of the baby as we do that Ness gets his man. The tension created by Gerald B. Greenberg and Bill Pankow’s editing is almost unbearable. A standard action film would usually score this type of action with a bombastic soundtrack, but Ennio Morricone instead chooses a haunting children’s lullaby to contrast with the danger on screen.

Morricone’s score is full of surprises. The opening credits open with a driving orchestral main theme (The Strength Of The Righteous) contrasted with a solo harmonica – an echo of Morricone’s western soundtracks. The harmonica line follows a different melody and time-structure and can be read as an analogy of Ness’ struggles during the film. He begins as a solitary voice standing up against crime and corruption, just as the harmonica cuts through as a counterpoint to the thunderous main title.

We also hear the sound of opulence in the Al Capone theme, utilised over his scenes in his Lexington Hotel base. The aforementioned Machine Gun Lullaby is supremely affecting, and the two victory themes – Victorious and The Untouchables – find Morricone using the orchestra to soundtrack the rare victories over Capone’s empire.

One criticism of the film is that the soundtrack can occasionally come across as overly-sentimental and mawkish. It holds the hand of the audience, to ensure the correct emotive path is taken. Early in the film, Ness And His Family is used to soundtrack the agent’s home life immediately after we’ve seen the opening scene showing the girl as an innocent victim of the bombing. Morricone uses the score to contrast the horrors of what we’ve just seen with what Ness has to lose – his family, another absolute.

But it is Morricone’s score over Connery’s final scene – Death Theme, and its reprise in Four Friends – that I find the hardest to listen to. Just listening to the record conjures up a great emotional scene between Connery, Costner and Garcia. It’s almost too much to bear. Connery won the Best Supporting Oscar for the film, and most likely for that scene in particular. It was a rightful win; the crowning achievement of a film that doesn’t get the level of praise it deserves.

De Palma’s films are often conflicted. He is often criticised for a cinematic approach of style over substance. The Untouchables melds the two perfectly and absolutely.

Hit: The Strength Of The Righteous (Main Title) 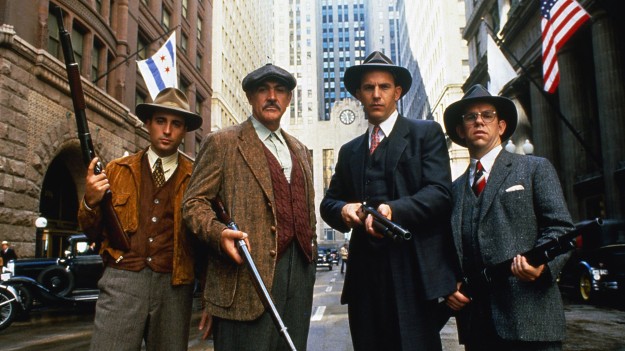 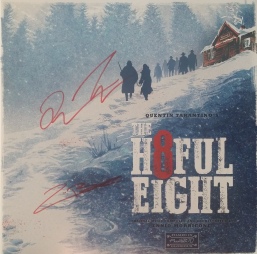 A host of minor New Zealand celebrities have tested everybody’s patience while we await a glimpse of Quentin Tarantino at the New Zealand premiere of The Hateful Eight.

Cast member (Six-Horse Judy) and Tarantino alumni Zoe Bell comes around first. She gladly signs an autograph on Johnny’s copy of The Hateful Eight on vinyl. Johnny hands her a red marker so that it matches the blood splatters in the snow on the cover. 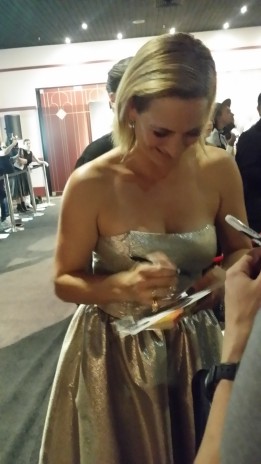 Johnny: Thank you Zoe – could you also sign my copy of Death Proof?

Working his way down the red carpet, Quentin starts scrawling his autograph on Johnny’s copy of The Hateful Eight on vinyl. Again the signature is in blood red.

Johnny: Hey Quentin – thanks so much for coming out to see us in New Zealand; we always get forgotten about… 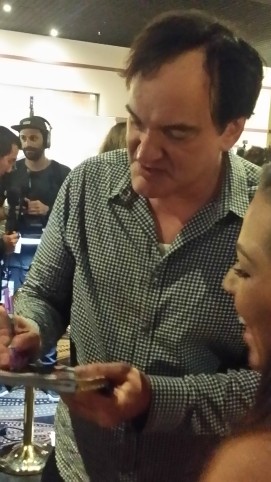 Johnny is about to melt from a mixture of adrenaline and utter panic at having being sartorially complimented by one of his heroes.

Quentin looks up, slightly taken aback. He makes eye contact again, leans back and taps Johnny on the shoulder.

Quentin moves down the line to speak to his other adoring fans. Johnny vomits and dies of excitement. 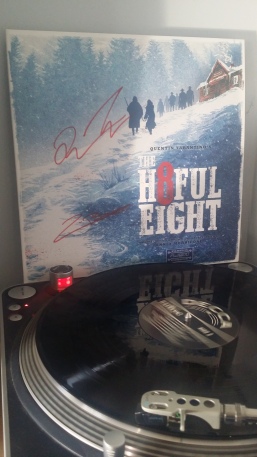 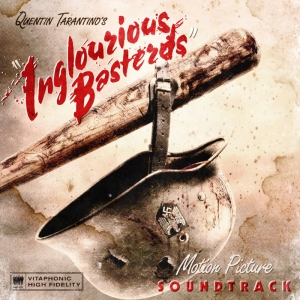 Of all of Tarantino’s films so far, this is probably the one I’ve liked the least. Death Proof was pretty poor, for no other reason than it was just plain boring; this film however, was insulting in its revisionist fantasy retelling of WWII events.

The soundtracks jars slightly too, because among snippets of Morricone film scores (which prop up the album), there are odd choices that sit in-between them.  Songs like David Bowie’s Cat People (Putting Out The Fire) or Billy Preston’s Slaughter would have fit into any other Tarantino soundtrack – but as an accompaniment to a period film, which otherwise is well scored with Morricone’s western themes, they feel just a little too much out of place.

The vinyl artwork for this soundtrack is very nice – made to look like a very old 1940s release, with water marks around the edges and publicity shots from the film printed with Ben-Day dots.