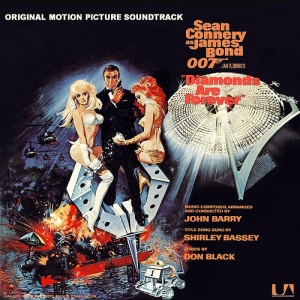 Sean Connery is back! Shirley Bassey is back! Director Guy Hamilton is back! Everybody’s back!

Bond producers Harry Saltzman and Cubby Broccoli’s attempts to reproduce the success of 1964’s Goldfinger were thinly veiled. Get the original 007 back in the role, get Goldfinger’s director back, and the singer of its theme song. Get Richard Maibaum, the screenwriter of Goldfinger, to write the script, and instruct him to set most of the film in America, much like the 1964 film. Hell, even the subject matter of the film is similar – where the subject matter of Goldfinger deals with gold, Diamonds Are Forever deals with, erm, diamonds.

The only problem is that the film it isn’t anywhere near as good as Goldfinger. The plotting is messy, and the film feels a little lost at sea between the swing of the sixties, and the sleaze of the seventies. It’s lucky that the Bond producers were able to bring Connery back, as the film might have suffered more without his magnetic presence.

The previous Bond, George Lazenby, had been offered a contract for seven films but left after only one (On Her Majesty’s Secret Service). In his place, the role almost went to American actor John Gavin – the heroic brother-in-law in Alfred Hitchcock’s Psycho. Gavin even signed a contract to play Bond, before the producers were able to lure Connery back, and Gavin was again set to play Bond in Live And Let Die before they changed their minds again and settled on Roger Moore.

Connery looks a little heavy this time around – and his ever-present hairpiece looks more obvious than it ever had, John Barry’s score comes a little too close to sounding like James Last in his attempts to replicate the lounge music of the Las Vegas setting, and Charles Gray’s portrayal of Ernst Stavro Blofeld loses all the menace that Donald Pleasance had brought to the role (admittedly this had been lost with Telly Savalas’ portrayal in OHMSS).

But I love Diamonds Are Forever regardless. It features my favourite Bond girl – the top-heavy Lana Wood – despite her role being very short and sweet. The theme song remains one of my favourites, and I was lucky enough to see Bassey perform it one year at Glastonbury in a medley of her Bond themes. Bond’s gadgets are reined in before the silliness of the Roger Moore era, and the film feels like one last hurrah for Connery’s 007 (although of course he would return to the role one more time in 1983’s Never Say Never Again).

The only drawback about the film is the stunt work, particularly in the mistakes they made with the Ford Mustang car chase. First of all, the thrilling police pursuit through the streets of Las Vegas is partly ruined by the fact that the sequence is clearly being watched by crowds of onlookers – as the producer’s were unable to close off the city’s streets from pedestrians. 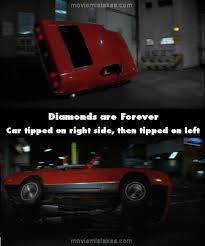 Secondly, and most damning of all, the chase’s finale where Bond escapes the police by driving on two wheels through a tight alleyway was filmed incorrectly. They filmed the approach using two wheels on one side of the car, and filmed the shot of the car emerging from the alley on the opposite two wheels of the car. How terrible, and one wonders whether the continuity person – or in fact anybody working on this particular stunt – could ever hold their head high in Hollywood ever again. As a movie mistake, it’s up there with the Star Wars stormtrooper hitting his head on the Death Star doorway, or Charlton Heston supposedly wearing a wristwatch in Ben-Hur’s chariot race (an urban legend that has since been quashed).

Editors Bert Bates and John Holmes couldn’t have solved the mistake by reversing the film as both shots featured writing on buildings and advertisement hoardings, and so the only way out was a shot mid-alley which was made to look like Bond switched sides of the car mid-stunt. James Bond 007, licence to defy the laws of physics. As far as Bond mistakes go, this is even worse than choosing to soundtrack The Man With The Golden Gun’s barrel-roll stunt with a slide whistle. 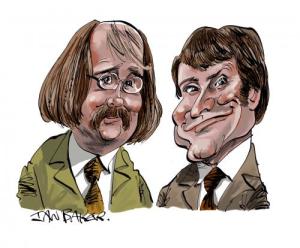 Diamonds Are Fever’s lovable villains, the vaguely homosexual Mr. Wint and Mr. Kidd deserve special mention, and not only for their great performance in the film as the murderous duo. Mr. Wint was played by actor Bruce Glover – father of Crispin ‘George McFly’ Glover – while Mr. Kidd was played by musician Putter Smith, bass player on sessions for, among others, Thelonius Monk, the Beach Boys and the Righteous Brothers.