My love/hate relationship with the Clash continues. Re-released on Record Store Day’s Black Friday in 2015, I really only bought this because of the lovely split vinyl in white riot / Protex blue. It’s too good just to look at though.

One of the things I love about this debut album is the tracklisting versus the running time. Fourteen songs breeze past in thirty five minutes. What’s not to like about an album where the average running time is two minutes and fifty three seconds? If you don’t like a certain song, by the time you reached that decision, there’ll be another one coming around the corner in a matter of seconds.

I should like the Clash. They’re clearly the most talented of all the bands that came out of the punk movement in the UK. They can really play and they’re great songwriters, which you can’t say for a lot of the punk bands that got by on a mixture of attitude, nose rings and spit. It isn’t the band that’s to blame though for my apathy towards them, it’s the bloody fans.

Clash fans are one of the worst subcultures in music fandom. To Clash fans, the Clash are the beginning and end of everything. And don’t get me started on the deification of Joe Strummer. As part of a well-balanced musical diet, the Clash are a healthy pursuit, but moderation is everything and the Clash are really nothing more than the best of a bad bunch. Or are they something more? What am I missing? 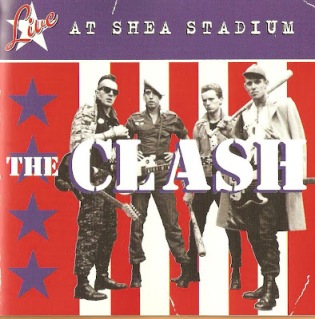 I might get shot for this, for I’m just not a huge fan of The Clash. I find their supposed masterpiece London Calling to be bloated and dull, aside from the overlooked Train In Vain which almost seems to be tacked on to the end as an afterthought. They can write a decent tune though – and this great live album is a testament to that.

The album was recorded in 1982 at the famous New York baseball ground, with The Clash middle on the bill between an opening set by ex-New York Doll David Johansen and headliners The Who. It’s essentially a race through their greatest hits, and next to each other these songs – Should I Stay Or Should I Go, Rock The Casbah, London Calling – really highlight the strength of the band’s pop credentials.

Clash fans may be annoyed at the choice of set list – they don’t play much material from their punk beginnings, and they especially don’t have the balls to play I’m So Bored With The USA – but at the end of the day, the whole thing comes across simply as a promotional jaunt to sell records – a captive audience of teenage Who fans represents a great opportunity to grow your fanbase on that side of the Atlantic. History has painted Strummer and company as punk’s last flag bearers of art before commerce, but it looks here like they were just trying to sell as many records as everybody else.