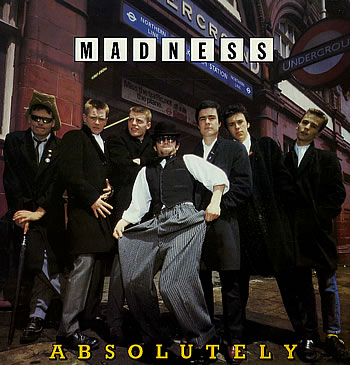 Madness always felt like something above me when I was growing up, somehow out of my reach, but enjoyable nevertheless. It wasn’t until one of my early bosses, Neil Walsh, and one of my good friends, Paul Hughes, started talking to me about the band that I gave them a proper listen.

The one thing that sticks out about Madness is the streak of melancholy that runs through even their most upbeat of songs. They’re undoubtedly a pop band, but it seems they’ve popularised sad tunes instead of happy tunes. Some of their songs are both though – Baggy Trousers is a rollicking opening to the album, but it just sounds so…ominous.

It also feels like Madness doesn’t really translate to the rest of the UK as well as they do within Londoners. I’ll always associate the band with cockney skinheads – all sunburn and stonewashed denim – even though I’m sure there have fans from all walks of life.

There’s an early episode of Sacha Baren Cohen’s Bruno, where he interviews a drunk in a London bus-stop late at night. The drunk has a problem understanding what he’s being interviewed about, and when Bruno asks him to give an example of something he’s done that’s outrageous, he just about manages to mumble something about ‘walking across the beer tent at Madness.’ As soon as Bruno makes it clear that he wants the drunk to give a message to camera, to the gay audience back in Germany, he becomes belligerent and homophobic. Unfortunately, it’s this type of person that taints the image of the band for everybody else. The band themselves might be as left-wing as they come, but it doesn’t matter – a small element of their fan base have right-wing tendencies, and that’s something I find hard to forget.