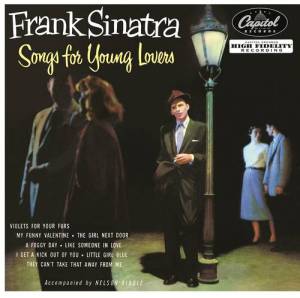 1954? That makes this recording over sixty years old. It still sounds crystal clear – it would, it’s the 2015 Record Store Day reissue – but regardless, it’s still magical sounding. In the next couple of decades we’re going to start approaching being able to listen to 100 year old recordings. Insane. Well, I guess we can listen to 100 year old recordings now, but considering that nobody put out anything worth a salt until the 1950s, it won’t be worth considering for a while yet.

In fact, that’s wrong. Glenn Miller’s a boss, and he was the best-selling recording artist from 1939 to 1943. So 1939 would mean twenty two years until the centennial celebrations for the likes of In The Mood and Chattanooga Choo Choo. But just imagine when we reach the 100 year anniversary of the first Frank Sinatra hit, or Elvis’ Heartbreak Hotel, or the first Beatles album. Good grief. Will we start referring to it as classical musical?

Running in under a sprightly twenty two minutes, this 10” album comes from a time before the 12” record won the war to become the primary record format. This happened a few years later around 1957, just in time for the rock and roll explosion. It’s a nice format, but obviously the shorter running time leaves you wanting more. We’d call it an EP these days, but back then they’d probably just refer to it as Frank’s latest record, regardless of the running length.

Hit: I Get A Kick Out Of You

Hidden Gem: The Girl Next Door