A nice bit of serendipity occurred recently. I was playing Johnny Cash’s American Recordings album, the first of his six with Rick Rubin, and the only one I own. I posted on the Vinyl Lovers Of New Zealand group on Facebook, as I always do, that I was listening to it.

‘I really must seek out more of these,’ I wrote. ‘I’ve heard them all, of course, but this is the only one I have on record.’ At $50 a pop brand-new, it was unlikely I’d ever stump for them all in one go, and I never saw them in second-hand racks. My long-term goal was to buy one a year or so, until I had them all.

A comment from one of my fellow VLONZers said ‘I have NM copies of III, IV, V and VI, as well as Unchained [II] for sale in great condition. PM me if interested.’

The first record in the six represents the start of a late-career resurgence for Cash, at the height of grunge. Producer Rick Rubin had seen Cash perform at Bob Dylan’s 30th anniversary concert in 1992 and felt he had been overlooked and forgotten by the music industry and the record-buying public.

Recorded between May and December of 1993, the bulk of the album was recorded in two key locations: Rick Rubin’s living room in L.A. and Cash’s cabin in Tennessee. Two additional live performances were captured at Johnny Depp’s Viper Room on Sunset Strip, just five weeks after the actor River Phoenix died of a drug overdose there.

Unlike the subsequent albums in the American series, which finds Cash backed by Tom Petty and the Heartbreakers alongside a who’s who of guest appearances, the first record is performed completely by Cash himself, just a voice and a guitar. It therefore doesn’t have the grunt of those later records – and it’s a long way from the perfection of American IV: The Man Comes Around. But it’s still a great album, full of what Rolling Stone called ‘biblical intensity’, highlighted by Rubin’s ‘no-frills production’.

Tennessee Stud, one of the songs recorded at the Viper Room, was originally written by Jimmy Driftwood in 1959. It probably stands as the most well-known track from the album, if only for its inclusion one year later on Quentin Tarantino’s Jackie Brown soundtrack. The song perfectly encapsulates the ethos of the American project, and gives an indication of what was to come: the opportunity for Cash to breathe life into cover songs, old and new, alongside a brace of originals, to bring his music to a new audience. 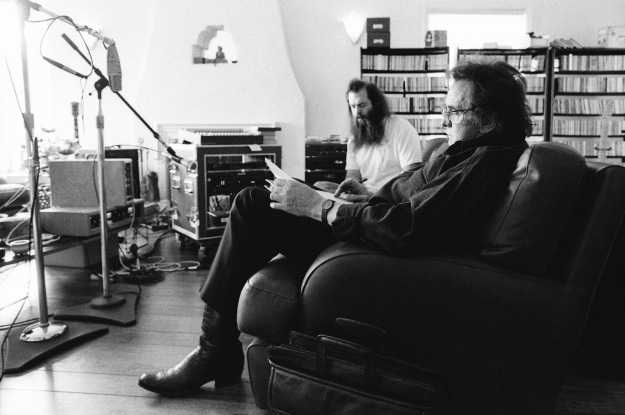