The first thing that jumps out when revisiting Adrian Lyne’s 1990 film Jacob’s Ladder is just how disgusting New York City looks. Set mostly in 1975, the city looks unrecognisable; more Pelham 1-2-3 than the tourist-friendly city of the 21st century. Tenement buildings are grimy, subway cars are strewn with litter and the streets are as uninviting as the sewers beneath them.

Tim Robbins, just before being recognised as a national treasure, plays Jacob Singer, a US infrantryman in Vietnam. In the film’s opening sequence, his platoon is ambushed by an unseen enemy while many of his comrades suffer unexplained convulsions and seizures. The sequence ends with Jacob himself receiving a bayonet to the chest.

He wakes up (WINK!) years later in New York City, having just fallen asleep on a late-night subway train. Slowly, over the course of the next ninety minutes, his life begins to unravel as he sees disturbing visions and phenomena. The special effects are great; low-key and minimal, but brilliantly effective. Being made in 1990, it manages to avoid the over-reliance on computer-generated effects that burdened Hollywood later in the decade.

Not only do we get Tri-Star and Carolco studio idents at the top of the film, but what a great ensemble cast: Tim Robbins, Ving Rhames, Macauley Culkin, Danny Aiello, Eriq La Salle, Jason Alexander (with hair) and Brian Tarantina.

The film has a really nice, slow build-up. You can’t imagine a modern-day horror taking this amount of time (aside from Ari Aster’s Hereditary and Leigh Whannell’s The Invisible Man).

Maurice Jarre’s score fits the film perfectly. The delicate, lilting piano lines of the soundtrack’s main title reminds me of Michael Andrews’ work on Donnie Darko, and it’s clear that this must have been a key text for Andrews when composing that score. To add to this, the crescendo of Jarre’s final cue, The Ladder, feels like it might have had some influence on Howard Shore’s sublime score to The Silence Of The Lambs a year later in 1991. There’s even a couple of nice needle-drops, particularly in the party scene. A mental freak-out over James Brown’s My Thang? Yes please!

I first watched the film during my first foray into horror – most probably when it was first broadcast on Sky TV in the UK – but it didn’t do much for me at the time. I’ve really enjoyed a revisit 30 years later. In light of the coronavirus pandemic reaching fever pitch last week, it’s a ripe reflection of the panic and hysteria that’s happening around the world. Just because you’re paranoid don’t mean they’re not after you.

And not a Huey Lewis & The News song in sight… 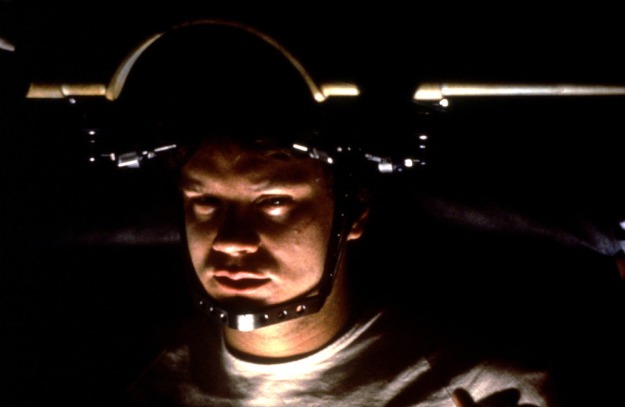