During their formation in the early 1970s, Aerosmith guitarist Joe Perry initially rejected Steven Tyler’s proto-power ballad Dream On, believing that the only type of slow song the band should play was a slow blues. Perry was somehow won over (overruled? blackmailed?) by Tyler and they recorded the song in late 1972. It was a high point on the band’s self-titled 1973 debut, eventually becoming one of the band’s biggest hits, peaking at #6 on the U.S. Billboard Top 200 upon its re-release as a single in 1976.

Twenty years on, and Perry’s principles have been left behind in rehab with his various drug addictions. Either that or his accountant has managed to point out how many Ferraris and swimming pools Tyler’s ballads have paid for in the intervening decades. Their eleventh studio album, Get A Grip shows that Perry has all but given up in the struggle against Tyler’s proclivity towards slower, commercial songs.

Things don’t start well, with Tyler rapping – yes, rapping – over a drum loop. A snippet of their well-known Walk This Way riff completes the heavy-handed reference to the band’s crossover hit with Run-D.M.C., before making way for some Polynesian drums and the first song proper, Eat The Rich. It sets the scene well, with a heavy riff and a ballsy production by Bruce Fairbairn aimed at a grunge / alternative rock audience.

Something isn’t quite right though. Over their two previous records, Permanent Vacation (1987) and Pump (1989), Aerosmith showed that they could succeed by employing external songwriters. But Pump, the more successful of those albums, still had a decent proportion – 60% – of self-penned songs. With Get A Grip however, Aerosmith put almost all of the album – thirteen out of fifteen songs – into the hands of ‘song doctors’. As a result, the band sound less and less like the 1970s classic rock versions of themselves, and more and more like something created in a school for performing arts.

The album has no less than seven singles (released over a fourteen-month span), and this is where the album loses focus. It’s almost as if they were trying to create an album of singles, a ready-made Greatest Hits compilation. Released smack-bang in that early-‘90s period when nearly all rock albums tended to be sixty-plus minute affairs, the only limits were the band’s imagination (and the running length of a compact disc). As a result, it lacks the cohesion of Pump, and has far too much filler material.

Joe Perry should be happy though. The album contains a more than adequate dose of straightforward rockers, and he even gets to sing a self-penned number (the refreshing Walk On Down). However, it isn’t power ballads that Perry should be looking out for; Steven Tyler has a new weapon in his arsenal – country-rock. Be afraid, be very afraid.

One of the most joyous moments on Pump was its final song What It Takes – a slow-burning country-tinged ballad, co-written by Tyler and Perry with Desmond Child. Something about it didn’t seem serious though. Tyler hams it up by singing the lyrics in a southern drawl, and it sounds more like the band is having fun playing in a different style than a serious attempt at a change in genre.

Fast forward four years and either Tyler has been bitten by the country bug or somebody has pointed out how lucrative the country market is. Two of Get A Grip’s singles – Cryin’ and Crazy – are unashamedly country rock, and this time the band aren’t playing around. They’re deadly serious. By 1993, two of Garth Brooks’ four albums had debuted at #1 on the Billboard 200 – a feat Aerosmith could only dream of at that point – so it’s difficult to view their change of direction without a degree of cynicism. Get A Grip would be their first record to peak at #1, so maybe the left turn into country music paid off.

The album does have some high-points– the cosmic jam of Gotta Love It finds them channelling the Red Hot Chili Peppers, Line Up is a welcome collaboration with Lenny Kravitz and Boogie Man might just be the weirdest, most soothing guitar instrumental you’ve ever heard after Fleetwood Mac’s Albatross.

The Get A Grip tour programme

But it’s the big singles that are the showcase of the album. Released a month in advance, Living On The Edge is a weighty rocker, with the band in important-message-to-the-youth-of-today mode. It’s so earnest; a million miles away from the band who had recently been singing about transvestites and sex in elevators. The other notable hits – the Alicia Silverstone music video trilogy of Cryin’, Amazing and Crazy – are as commercial sounding as possible. Chart fodder, indistinguishable from a Bon Jovi record.

I saw Aerosmith on the Get A Grip tour, in Sheffield on Thursday October 21st 1993, the very first concert I went to, and so the record means a lot to me. I just wish that such an important record in my musical upbringing was a better record.

If Pump represented a high water-mark for the second age of Aerosmith, Get A Grip signals the beginning of a long, slippery slope downhill.

Hit: Livin’ On The Edge 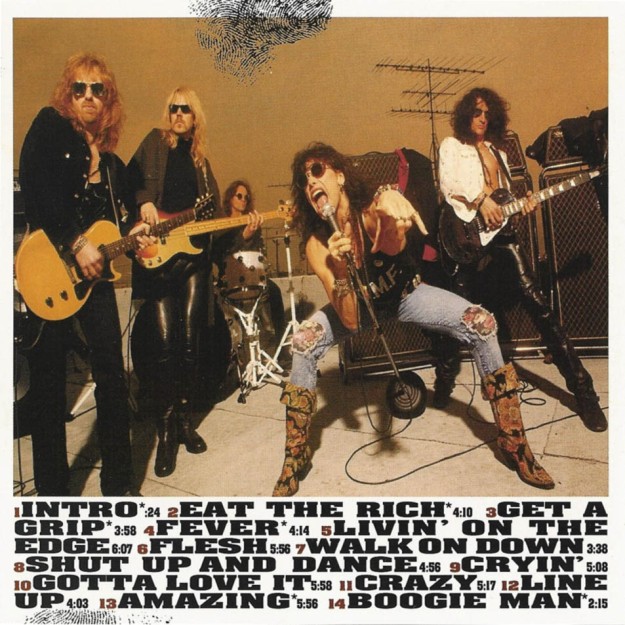