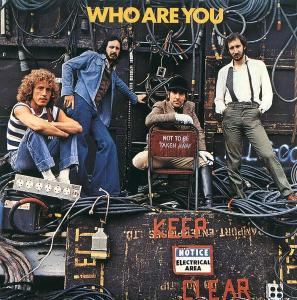 There was a promising time around ten years or so ago, when it seemed like they were going to extend the CSI TV show across every city in America. First there was CSI: Crime Scene Investigation (AKA CSI: Las Vegas), with The Who’s Who Are You as the opening theme. Then came CSI: Miami, with Won’t Get Fooled Again, and finally, CSI: New York with Baba O’Riley.

It almost seemed like there was going to be a different spin-off show for every city. But there’s only so many Who songs. Imagine CSI: Cleveland with Pictures Of Lily across the opening credits, or CSI: Atlanta with Happy Jack blaring out over a montage of moody looking detectives.

There’s a new spin-off in the making, called CSI: Cyber, which has been picked up for a full season. There’s no word on which Who song will be used, but I’m hopeful it will be Squeeze Box (seriously though, the slow burn of Eminence Front from 1982’s It’s Hard would be a perfect – and not too obvious – fit).

This is Who album number eight, and the last with Keith Moon on the drummer’s stool. I’m sure it must have been mentioned that on the cover he’s sat on a chair inscribed with ‘Not to be taken away’. Unfortunate. The album’s not one of their best – you can hardly tell Moon’s on the drums, and there’s so much synth across most of the tracks (sometimes overshadowing the guitar), it just sounds dated. By this point they’ve come a long, long way from their beat group days as the High Numbers. They’re no longer relevant, just a bloated British rock band churning out middle-of-the-road material, a million miles from their Mod beginnings.

Hit: Who Are You