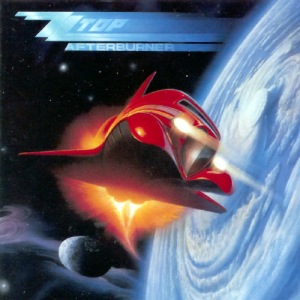 I’m not saying that ZZ Top were old men by the time they recorded this album, but the chorus on the opening track seems to consist solely of Billy Gibbons singing “slippers and my sleeping bag” over and over. A lyric check on Google corrects me – the misheard lyric is “slip inside my sleeping bag.” So Billy Gibbons isn’t just an old man, he’s a dirty old man! Track number three sees Gibbons’ lyrics returning to perversion. Entitled Woke Up With Wood, I’m presuming it’s not about a carpenter who fell asleep in his tool-shed.

Afterburner represents ZZ Top at their worst. If 1983’s Eliminator showed the band taking a sharp left turn in their musical direction, this record shows them much further down that same road, many miles west of their original highway. The album is essentially a rehash of the formula they laid down on Eliminator, without the strength of the songs on that earlier album.

Both albums, and the follow-up Recycler (1990), sound extremely dated now.  It’s not hard to understand why grunge came about to blow away the cobwebs of rock music like this. To think that ZZ Top released their third album of this sort of crappy synthesised rock in 1990, when grunge was in full swing is almost hard to believe.