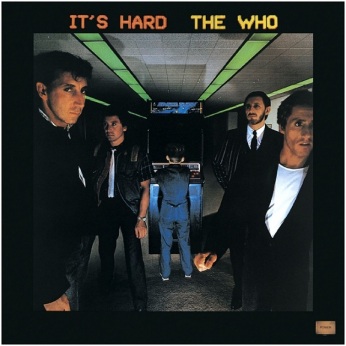 Argh, the ‘80s! The cover of this record is a bit confused. Roger Daltrey looks like a real estate agent. Pete Townshend looks like a pre-op transsexual. John Entwistle looks bizarrely like Ringo Starr in a pinstripe suit. Kenney Jones looks like a waxwork. All four of them are facing away from a young boy playing a Space Invaders machine, his back to the camera, in a darkened room. Aside from the allusions to Pinball Wizard, I don’t know what this all means, but it feels dodgy. Don’t worry though; Townshend was just doing research, right?

Thankfully the album doesn’t sound as unnaturally ‘80s as they were trying to make themselves look on the cover. There’s a fair bit of synth on the album – but no more than say, Quadrophenia, and that always jarred slightly on that album anyway.

The reason I’ll put this album on will always be the last track on the first side – Eminence Front, with lead vocals by Townshend himself. I know the song from the soundtrack of Grand Theft Auto: San Andreas, so hearing its slow burn always reminds me of driving around Los Santos, San Fierro and Las Venturas, knocking over pedestrians and doing drive-bys.