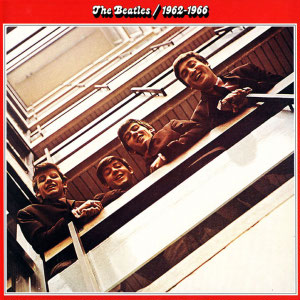 This collection, better known as The Red Album, was the first compilation to be officially released after the band split.

Essentially it’s a gathering together of all of The Beatles singles between those years, complimented by the occasional album-track; however it strangely includes 6 non-single album tracks from Rubber Soul. This has always caused consternation among Beatles fans – why favour so many songs from Rubber Soul while Revolver is ignored with only two tracks.

The answer seems to be that the albums were compiled by the then-manager Allen Klein. It simply seems to be a case of his personal choice, but at the end of the day I’m glad that Rubber Soul got plundered and the far superior Revolver escapes relatively unscathed.

I once took part in a pub quiz where one of the questions was the reason why this album, and its follow-up 1967 – 1970, were coloured red and blue respectively. The answer – from the guy running the quiz – was that it was a nod to the band’s hometown of Liverpool, and the colours of their two football teams, Liverpool and Everton. I don’t know if I believe that – and considering that I’ve read more books on The Beatles than on any other band, I’m yet to read that claim anywhere else.

Hit: I Want To Hold Your Hand